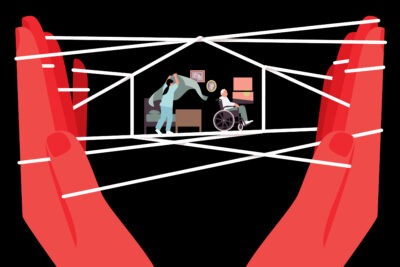 ProPublica is a nonprofit newsroom that investigates abuses of power. Sign up to receive our biggest stories as soon as they’re published.

“The New Yorker-ProPublica investigation shook the industry to its foundation,” said Dr. Diane Meier, a geriatrician at New York’s Mount Sinai hospital and a leading authority on palliative care. “You have four major industry groups coming together, as they don’t always do, on a series of significant policy and regulatory changes for hospice. This suggests — contrary to public messages about this being just a few bad actors — that it’s not just a few bad actors. There are systemic problems with the lack of oversight and the profit motive.”

Industry leaders are not the only bloc pressuring CMS for greater hospice oversight. Senators and government watchdog agencies are also pushing the agency for concrete changes. Last week, the Government Accountability Office released a report asking that hospices be required to report observations of abuse and neglect, regardless of whether the alleged perpetrator works at the hospice. MedPAC, the congressional advisory panel on Medicare spending, has again endorsed modifying the hospice payment structure to reduce part of the financial incentive for enrolling ineligible patients. And in late December, the inspector general’s office at the Department of Health and Human Services announced that curbing the abuse of hospice patients was among its top unimplemented recommendations.

Drawing on state licensing records and federal data, our story highlighted how networks of entrepreneurs are propping up an alarming number of for-profit hospices in Nevada, Texas, Arizona and California. As part of their recommendations, the trade groups flag several specific ways that CMS could use its power to curb the “inappropriate” proliferation of hospice licenses, such as increasing the number of inspections for new providers, limiting Medicare hospice certifications in high-growth areas and cutting off funding to high-risk operators. ProPublica found that some of these new hospices improbably share staff, owners and addresses. These suspicious business practices, the trade organizations note, could be treated as red flags that would trigger prepayment scrutiny or billing audits.

“Providers don’t like surveys” — inspections — “and are usually not the ones to ask for more of them,” said Dr. Joan Teno, an expert on the industry and adjunct professor at the Brown University School of Public Health. “You’ll hear various entities paying lip service to reform, but what they’re saying here is that they want to fix the problem and offering specific recommendations for how to do so. It’s unusual and impressive.”

Among its proposals, the memo discusses the need to rein in predatory marketing schemes. ProPublica’s reporting found that profit-seeking providers can take advantage of the fact that many people don’t know what hospice is to recruit new patients who are not dying. Some hospice marketers — known in the industry as “community liaisons” or “community educators” — aggressively solicit new patients with promises of free housekeeping and trips to the beach and casino. Others treat physicians to cash bounties and bottle service at Las Vegas nightclubs to gin up referrals. The groups ask that CMS update its regulations to require hospices to develop policies on “ethical marketing practices.” (Such policies, they note, must prohibit kickbacks, disclose bonuses to marketers and mandate that hospices clearly explain the benefit to patients.)

ProPublica’s investigation pointed out that practically anyone can open a hospice. I came across hospices owned by vacation-rental superhosts, a man convicted of drug distribution and a criminal-defense attorney (who once represented a hospice employee convicted of fraud and was later investigated for hospice fraud himself). The trade associations have asked CMS to prohibit individuals with convictions for certain crimes from operating hospices and to require training and background checks for hospice administrators, noting that “unqualified or risky hospice leadership” could lead to fraud or poor quality of care.

Congress and Industry Leaders Call for Crackdown on Hospice Fraud

It’s hard to require that hospice owners have appropriate qualifications, however, if the identity of those owners remains unknown. As private equity firms acquire an ever-greater share of the hospice market, many families have no way of untangling who actually operates their provider. This lack of transparency, the trade groups write, “makes accountability for poor performance difficult and makes it harder for patients and families to choose quality providers.” At the moment, it’s easier to research a hotel for your honeymoon than it is to research the hospice that will care for your loved one. But it doesn’t have to be this way: CMS could make hospices disclose their owners and major investors, the groups say. It could also revamp its Care Compare website — a sort of TripAdvisor for end-of-life care consumers — to prioritize quality metrics and make its data more accessible. In response to questions from a groundswell of readers in the wake of its reporting, ProPublica published a guide to help families research their provider and spot common signs of fraud. The trade groups propose that similar information be incorporated into the official Medicare handbook for hospice consumers.

Throughout the memo, the trade groups emphasize that CMS already has the authority to implement many of their suggested reforms. The next step, they say, is making sure the agency has the funding to actually carry out its essential oversight role. “Part of our plan is to offer support in advocating for the agency to have the resources it needs, and that’s part of our goal in sharing this with Congress,” said Mollie Gurian, a vice president at LeadingAge, an association of nonprofit eldercare providers, which co-authored the memo. Gurian and her peers in the field are in the process of scheduling a meeting with CMS, which did not respond to ProPublica’s request for comment. “We didn’t all come into these discussions with the same list, but we are all committed for hospice to be the special benefit that it is and we all agree that it is under threat,” Gurian said.

Are Cyberattacks the New Normal? | The Agenda

U.S. Leadership is Essential in Delivering on our Promise of Universal Education

Medicare Fraud Prevention Week Teaches Everyone How to … – Medicare…

California Has a Unique Problem With Hospice Fraud. Can … – California…

‘The Soul of This Nation Is Strong:’ Biden Delivers State of the Union Address | WSJ

ESG Investment Guide: Why should you care about socially…

Medicare Fraud Prevention Week Teaches Everyone How to…

Moody’s to Pay $864 Million to Settle Inquiry Into Inflated…

Surgeon jailed over insurance scam and mortgage fraud must…

Trump claims the worsening U.S. coronavirus outbreak is a…

The War Thunder Leak Problem Will Only Get Worse –…