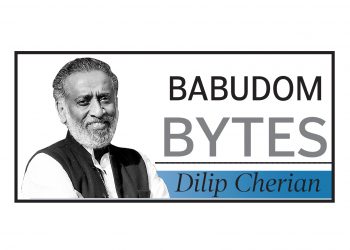 The recent registration of a case by the CBI against former finance secretary Arvind Mayaram and a few other officials of the Finance Ministry for alleged “irregularities” in the supply of the security thread for currency notes has caused some disquiet in babu circles.

Is it a coincidence that the CBI chose to move against Mayaram only days after the babu and his wife joined the Congress’ Bharat Jodo Yatra last month? After all, those in the know say that the case is five years old, stemming from a complaint filed in 2017 by the ministry. Why rake it up now, some people are asking.

But sources have informed DKB that the investigation was underway since then, ultimately leading to raids on Mayaram’s residences in Delhi and Jaipur. The babu is currently the principal economic advisor to Rajasthan Chief Minister Ashok Gehlot. Some observers suggest that the intended target of the CBI is a minister in the previous government, and this is a proxy attack. Whatever one thinks, this may just be the beginning of a long winding legal tussle.

IAS training gets a corporate fillip

Nearly everyone agrees that the civil service needs serious reforms if it has to be more effective in delivering good governance. Prime Minister Narendra Modi has frequently harped on the need for the babus to reform, perform and transform! Some steps have been taken in this direction, but now the attempt is to catch the babus when they are still training at the Lal Bahadur Shastri National Academy of Administration in Mussoorie. Not surprisingly, the Modi sarkar has taken a cue from the corporate sector to change the status quo and sought global experts to train young officers.

Sources have informed DKB that the academy has roped in domain experts from the World Bank, IMF, Lee Kuan Yew School of Public Policy and Carnegie Mellon University, among others, to coach the trainees. Alongside, the existing study modules have been revamped to instill “nationalism” in the officers and also focus on the “de-siloisation” of the system. The academy director Srinivas Katikithala believes that the aim is to bring efficiency and build a “performance-oriented competitive frame of work”.

The new initiative however has not been welcomed by all. Some senior officers are said to believe that officers need to learn from actual experience in the field and not from international policy experts. Bringing in experts from the corporate world, some feel, may bring in some analytical skills or technical knowledge, but it cannot replace the learnings from working in rural India and our unique and complex social structure. Do you agree? We’ll wait and see the results of the new experiment.

Haryana IAS officer Ashok Khemka’s notoriously peripatetic career is a cautionary tale for public administrators, especially those who play strictly by the rulebook.
Few babus have had a civil service career like Khemka, who in over three decades of babugiri, has had an average stint of six months in every posting. As additional chief secretary of the government’s Archives Department, his latest transfer comes on the heels of his letter to the state government saying that he didn’t have enough work after the merger of the Science and Technology and Higher Education departments. The response was a transfer; as he later described in a tweet, he was ‘archived’.

Over the past decade or so, Khemka has clearly toted up more transfers than any other IAS officer. This is his third posting in the Archives Department, an inconsequential position for someone described just three months ago by none other than the state Home Minister Anil Vij as “a gem” and a “rare breed officer” and is an additional chief secretary in rank.

But Khemka, being Khemka, is plodding on regardless of the government’s efforts to sideline him. The whistleblower is currently in a “feud” with Rohtak Division commissioner Sanjeev Verma, a state civil service officer promoted to the IAS over an alleged corruption case. There is never a dull moment. Watch this space for updates.

I could use your help

Poll: Ohioans Would Move to Other Garbage State (Florida) If Given Chance to Live…

Mayor accuses councillor of grandstanding on issue of…

Eight illegal gamblers thrown out of cricket matches in…