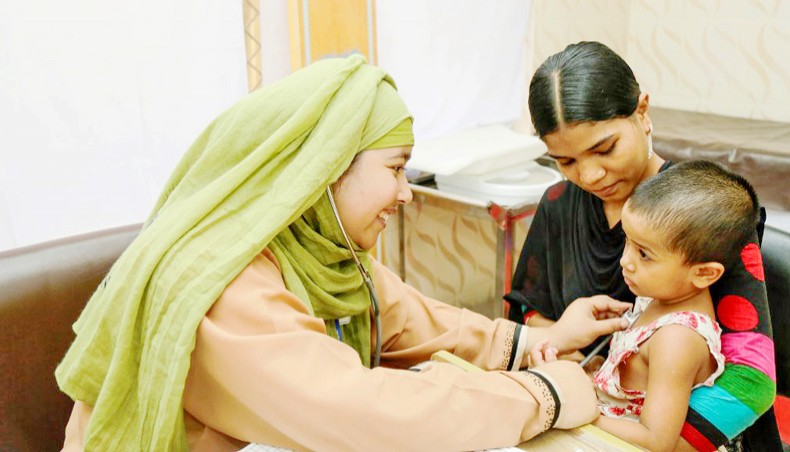 THE healthcare system is highly unregulated. As a result, it is largely controlled by for-profit companies, non-governmental organisations, and international welfare organisations. This shared power has caused many problems, including unequal treatment programmes between social classes. Even though the laws and the system are spearheaded by the health and family welfare ministry, other organisations have a considerable influence on decision-making, which is not good and fair.

Increasing allocation for the health sector is a common and justified demand. With an allocation of 0.9 per cent of gross domestic product and less than 5 per cent of the total budget expenditure, Bangladesh has very little investment in health care for its citizens. Of course, the progress that Bangladesh made in health-related targets cannot be overlooked. This has been possible because of targeted policies and investment in the sector by the government, the private sector, non-governmental organisations and development partners.

Among the recent policies, the National Health Policy 2011 recognises health as a right of citizens. It aims to achieve better health for all and strengthen primary health and emergency care for all. It also advocates an equitable access to health care by gender, disability and poverty. The other important initiative, the Health, Population and Nutrition Sector Programme covering 2017–2020, aims at moving towards a universal health coverage and achieving health-related Sustainable Development Goals.

There are provisions for five basic necessities of life in the constitution and health care comes in the fifth position. Socialism, which is the one of the constitution’s major fundamental policies, talks about the fulfilment of basic necessities of all citizens. So, health care by any means cannot be neglected. It is essential to ensure a better health care to build a healthy nation. As the state is meant to fulfil the basic necessities, a decline in the state’s expenditure for citizens is a matter not only of disappointment but also of concern. The Health Economics United under the health ministry is reported to have said the government’s portion of expenditure in health sector is 28 per cent in 2018, 26 per cent in 2019 and 23 per cent in 2022. This means a gradual decline in the government’s expenditure.

The World Health Organisation’s Bangladesh representative Bardan Jung Rana says if 69 per cent of the total health expense is borne at the individual level, this is a hindrance to achieving universal health safety. The government bears the lion’s share of individual’s health care in many welfare states, including neighbouring Sri Lanka, but the situation in Bangladesh is opposite.

Health complexes were established in all upazilas to reach healthcare services to the door steps of people. The government set up community clinics and many people receive health services at an affordable cost in unions. This is a good initiative. Yet, it cannot be said that healthcare services have been ensured for all. Many fall victim to mistreatment and ill-treatment in remote areas. New infrastructure is built and new machines are purchased for the health sector every year, but we hear reports on infrastructure lying abandoned in many places and expensive machines getting damaged in boxes.

Many hospitals do not have physicians and health workers in rural areas. Many hospitals have machines, but they do not have the required human resources to run the. As a result, people are compelled to go to private hospitals and, in some cases, people are deceived. To change this situation, the allocation must be increased to bring healthcare services and there is no alternative to strengthening oversight on whether the allocation is spent properly. Policymakers work to ensure healthcare services for all by 2030 and if the inertia does not change, the goal will remain unfulfilled.

National minorities, living in the plains and in the hill districts, account for about 2 per cent of the population, with the Chakmas being the largest community, followed by the Marmas and, then, the Tripuras. They have their own languages, social and religious customs, dress arrangements, and family and marriage structure. The shared camaraderie among ethnic minorities, irrespective of geographical location, is what makes them more distinguishable. Ethnic minority people residing in the plain have a relatively easy access to health care. However, people living in hill tracts, especially in remote hilly regions, have limited or no access to health care, not to speak of mental health care.

This is partly attributable to a disproportionate distribution of mental health care facilities, which have mushroomed in cities and major towns. This stands testimony to the sheer negligence and indifference towards the mental well-being of ethnic minority people, which has left them in increased health risks.

The procurement and budget for infrastructure are often sources of misappropriation of the health budget. Physicians who try to point out irregularities are often reportedly punished with posting to remote areas.  The waste of resources should be reduced and budget management should be improved to ensure the efficiency of resource use. It would be a good idea to undertake an audit of all health-related procurement. Relevant parliamentary standing committees may take the steps to establish accountability of public resources. Unless the vicious circle of corruption is broken and a system of accountability is established, there is little hope to improve healthcare services.

As the economy progresses, healthcare services through the private sector expand. It should be regulated and effectively monitored by the government to ensure quality. The healthcare system is closely linked to the health situation. There is a glaring shortage of physicians and nurses in public hospitals and health complexes. Steps must be taken to address this problem. The World Health Organisation and the UN Water keep watch on the safe water, sanitation and hygiene factors of healthcare institutions worldwide. They published a baseline report in 2019 pointing out reason for failure in the areas.

Rayhan Ahmed Topader is a researcher and columnist.

US Treasury Secretary Yellen Kicks Off Africa Tour in Senegal

Countdown on to World Government Summit 2023 in Dubai – Arab News

Experts of the Committee on Economic, Social and Cultural Rights … –…