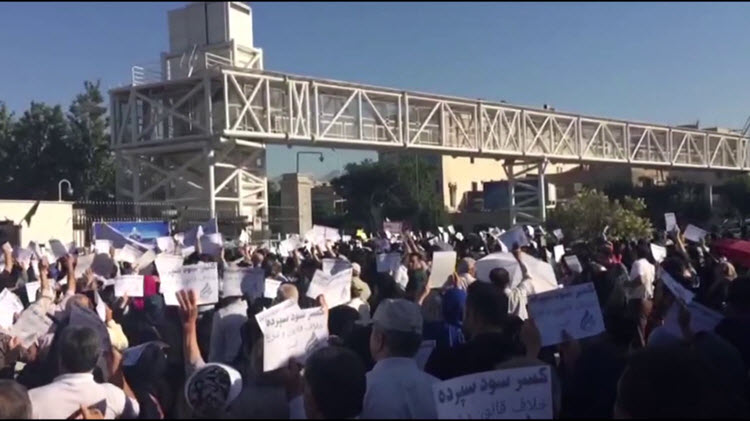 London, 24 Oct – The Iranian people are yet again rising up against the corrupt Regime and gathered in front of the country’s parliament to protest the plundering of their country’s wealth and the crooked policies of the Regime.

The Regime’s main opposition, the National Council of Resistance of Iran (NCRI), released a report and video showing over 2,000 people protesting outside the parliament in Tehran.

When the police began to arrest female protesters, the crowd responded with more anti-Regime chants, like “You are ISIS, you are ISIS, death to ISIS, let them go”, “Shame on [Iranian President Hassan] Rouhani”, “[head of the judiciary, Mohammad Sadeq Amoli] Larijani is a judge. He is the playmate of the thieves,” and “They had a budget deficit, so they took our money”.

The protesters shouted: “I will kill, I will kill the one who killed my brother.”

Then a motorised unit was deployed, only to also be pelted with rocks.

Maryam Rajavi, the president-elect of the NCRI, said in a statement: “The courageous chants in today’s demonstrations targeting the heads of the Judiciary and Executive Branch, as well as the suppressive State Security Force and intelligence forces, reflect the Iranian people’s desire for the overthrow of the mullahs’ religious dictatorship.”

She called on young Iranians to support their fellow citizens in fighting for their rights and expanding the protests.

Rajavi said: “Institutionalized fraud along with institutionalized murder and belligerence constitute the pillars of the mullahs’ decadent regime. Ali Khamenei and his office hold the strings controlling all the depraved crimes taking place in the country. As long as this regime is in power, there will be no end to the astronomical embezzlement, poverty, unemployment and catastrophic economic conditions.”

These type of protests started in 2016 over a financial scandal where thousands of people lost their life savings after entrusting it to government institutions.

Many of the investments were run by or tied to the Islamic Revolutionary Guard Corps (IRGC), which controls much of the Iranian economy.

The protests have, however, become increasingly political in the past year.

It is believed that Donald Trump’s speech last week, in which he decertified the nuclear deal, has emboldened the Iranian people who see new US policy as support for the people’s popular resistance.

The IRGC has recently had more sanctions levied against it by the Department of Treasury for its sponsorship of terrorism.

Book review of Untouchable: How Powerful People Get Away With It … – The…

Honeywell UOP to Pay Over $160 Million to Resolve Foreign Bribery … –…