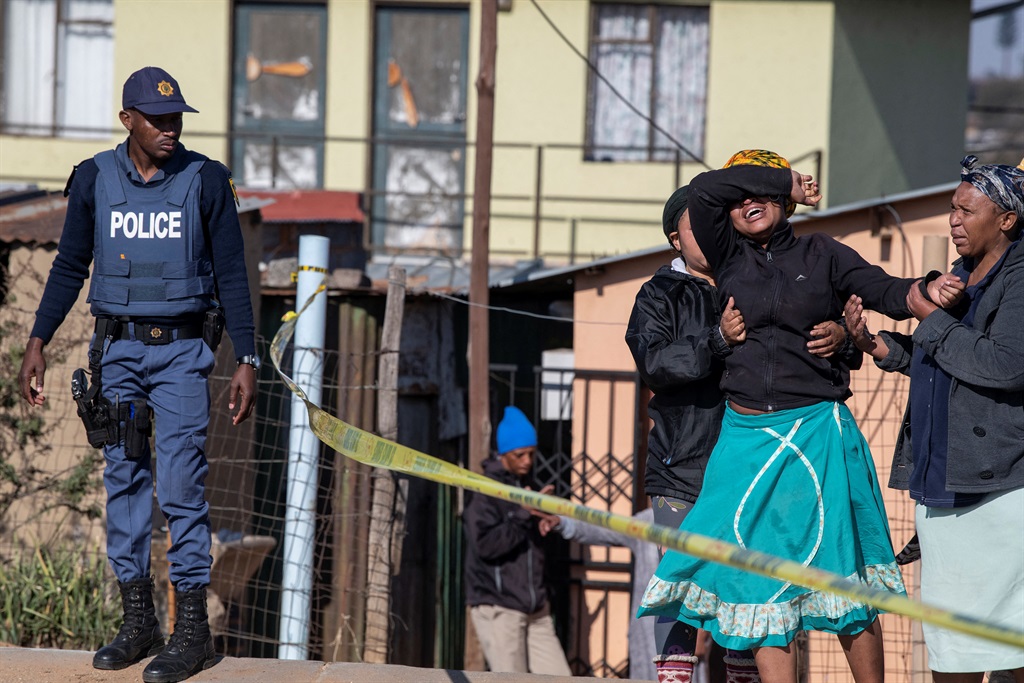 A victim’s relative cries as police officers refuse to let her cross the police barrier and enter the crime scene in Soweto. Photo: Ihsaan Haffejee/AFP

The police tread a fine line in any society between being a force or a service; between being a whipping post for the state or encouraging citizens to be law-abiding by fairly ensuring the country’s laws are respected.

South Africa’s dismal crime statistics have come to represent the worst of both worlds.

READ: Kagiso residents: Police have failed, we will deal with zama zamas ourselves

On the one hand, they reflect a broader society that appears to have little regard for the laws of the country, and robs, murders and rapes with apparent abandon and without fear of consequences or arrest.

On the other hand, it paints an SA Police Service (SAPS) as patently incompetent, unable to connect with the citizens and incapable of enforcing the country’s laws. In short, the public has lost faith in the ability of those appointed to protect them to actually do so.

The depravity of lawlessness is amplified by appalling crimes: the recent gang rapes in Krugersdorp on the West Rand are the current focal point in a country destroyed by economic decline, unemployment and a governing party out of touch with the needs of its populace. Thrown into this mix of combustible emotions is blaming all the country’s ills on immigrants – legal or illegal.

In the midst of these crises emerges a police minister who has been unable to guide the SAPS through years of turbulent leadership, operational decline and failing public confidence.

The horror that occurred in Krugersdorp has yet again shone a spotlight on police incompetence. For years, residents have complained of the dangers of illegal miners in the community. They had approached law enforcement agencies many times in the hope of getting help. None came.

Yet, in the wake of the brutal crimes and the subsequent public outcry, the SAPS became a reactive force determined to be seen to be doing what it should have been doing all along – enforcing the law. And therein lies the rub.

Enforcement of the law is not a matter of reaction – it is a matter of proaction, of engagement and of truly believing it to be necessary for a healthy and thriving society.

South Africans are tired of a minister who loves the limelight and tosses out pithy platitudes and guarantees in front of cameras. They are also tired of a corrupt and incompetent police service that makes a mockery of the oath to protect and serve.

Should federal judges have to obey the law?

SNOWFLAKE TRUMP Pleads the Fifth Amendment, So Let’s Break Down His Desperately…

We The People(U.S. Government): Chapter 14 The Bureaucracy

How to restore trust in Government. | Jason Saul |…

OPINION | Julian Rademeyer: There is no easy solution to the…

The Intelligence Community’s War On Trump

Most Pakistanis prefer democracy over theocracy and military…

Whatever happened to Mandela’s dream for South Africa?