0
Share
Bus keys jingled in Michael Darland’s pocket as he walked across the sizzling blacktop of a Scottsdale parking lot.

Darland, director at the Boys & Girls Club of Greater Scottsdale, was getting ready to pick up underprivileged kids and take them to summer camp.

He climbed into the bus, stuck the key in the ignition, and twisted it to the right. He heard an ear-splitting roar followed by a cacophony of sputtering. Darland let out a sigh. It was no mystery to him what the problem was.

Someone had stolen his catalytic converter — that shiny, tubular emission control device in a vehicle’s exhaust pipe.

The June 10 theft was not the first time Darland has been a victim of this crime. Since January 2021, thieves have jacked not one, not two, but seven catalytic converters from the Gilbert resident.

But thanks to new technology from one Phoenix auto dealer, he’s hopeful that the thief will have his day of reckoning.

And he’s not alone. Phoenix is rife with catalytic converter theft and, like the rest of Arizona, has seen an eye-watering spike in cases. That’s left Arizona residents among the most targeted in the country. The reason: Rare earth metals in the pollution control devices can be worth $20,000 per ounce.

That’s why, on the heels of Governor Doug Ducey signing a stiffer law last month prohibiting the possession and sale of used catalytic converters, Phoenix-based Courtesy Automotive Group this month began tagging converters on vehicles sold across its dealerships in Phoenix, Mesa, and Scottsdale.
click to enlarge 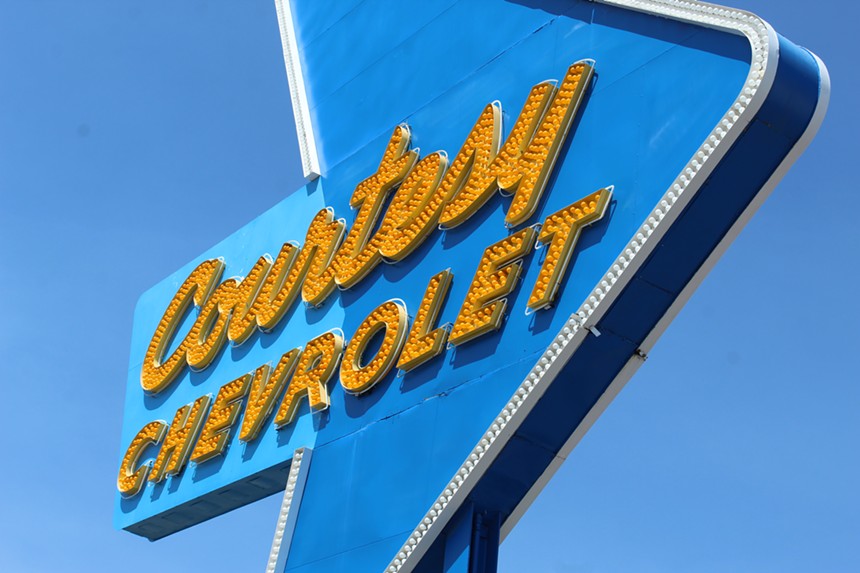 Courtesy Automotive Group, based at the East Camelback Auto Row at Camelback Road and 12th Street, is taking proactive action to stop catalytic converter thefts in the Valley.

Its new anti-theft technology is called SafeCat. Courtesy Automotive registers the SafeCat tag in a database that links to a vehicle’s VIN, and is accessible to law enforcement, prosecutors, and claims adjusters.

The product comes from Newbury Park, California-based AutoPrime Financial LLC. The first one was installed in California in late December, according to the U.S. Patent and Trademark Office.

Technicians at Courtesy Automotive Group, a family-owned Valley business since 1955, installed the first SafeCat in Arizona on June 6.

“Our customers were coming in with catalytic converters that had been cut out and stolen,” Jason Church, the chief operating officer at Courtesy Automotive, told Phoenix New Times on Thursday. “It went from something I only heard about to seeing it very frequently with my own customers.”

Between June 6 and June 10, the auto group installed nearly 100 SafeCats for customers, including Darland, for free. The one that got lifted last week was not traceable, but so far, two of his buses have been tagged.

Going forward, customers will pay $299 for each SafeCat install, which includes $3,000 in insurance.

Church remembered reading stories in New Times about catalytic converter theft, and how police have trouble tracing stolen converters back to their rightful owners.

Catalytic converters usually lack serial numbers or features that are able to be traced back to a victim or the victim’s vehicle, even when the bandits are caught red-handed on security tape.

“It’s almost impossible because there’s no identification on them,” he said. “We wanted to find something that would help provide the police with the necessary tracking ability to solve these crimes.”

After the most recent theft, Darland understood the need first-hand.

“The police came down here and checked it out, but you can’t get the video quality that you want at night,” Darland told New Times on Thursday. “It ends up going nowhere.”

No face, no name, no license plate — no conviction. 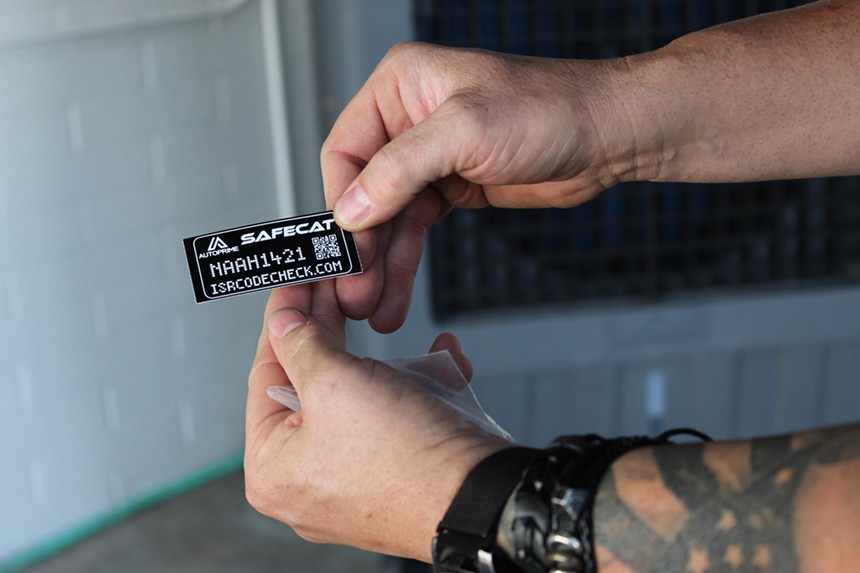 If stolen, detectives and insurance adjusters can use this special identifying number to instantly match a hot converter to a victim.

For the thousands of stolen converters, county attorneys have only ever prosecuted 17 such cases.

So far this year, just over one of every 1,000 Phoenix residents has been a victim of this crime, according to the Phoenix Police Department.

The emissions devices are so valuable because they contain platinum, palladium, and rhodium, three of the most valuable precious metals.

More catalytic converters are stolen in Arizona than in 41 other states, according to a March report from State Farm Insurance, the largest American auto insurer. The insurance company has had a 12,771 percent increase in the number of claims it paid out in Arizona over the past three years.

Even with Arizona’s new law, it’s important for industry and lawmakers to work side by side if that number is going to go down, Church added.

Late last month, Phoenix cops busted a man for possessing 1,200 hot converters. Another man was sentenced to more than seven years in prison after being indicted on a number of charges connected to stolen catalytic converters across the Valley.

But it’s still not enough to stop thieves from victimizing Darland and many others.

“We need to provide a solution,” Church said. “We want the converter to scream, ‘Don’t steal me, I’m highly identifiable!’” The focus is huge at local and federal levels to find a solution to the growing problem. Numerous states like California, where Courtesy Automotive also has one dealership, have suggested requiring manufacturers of catalytic converters to stamp VIN numbers on the devices.

The need for SafeCat technology should only span “a small window of time,” Church maintained.

For now, that need is strong. Especially in the Valley.

“We should put the VINs on the cats, which would make this obsolete,” Church said. “In the meantime, while this is an endemic theft situation, we need to be able to provide the consumers with some peace of mind.”

But the VINs and technology only help trace the catalytic converters one they’ve been lifted. They don’t stop thieves, who can pull the job in less than two minutes.

That leaves people like Darland with a hefty price to pay.

Stolen converters have cost him more than $20,000 in damages — $3,000 per bus, he said. Even after insurance, he still paid seven grand out of pocket.

“It has gotten ridiculous,” Darland said. “It’s free game out here. I’m not safe anywhere.” Then he added, in jest, “I wish I could get some German shepherds in the parking lot.”

OBIdiency and the ‘No Shishi’ phenomenon

The Moment When Liberals Realize They're Actually…

PERRY: We weren’t warned about the Supreme Court voiding…

Eric Edelman on Ukraine, NATO, and Confronting Our Strategic…

The Fight of Our Lives by George Soros

The Rothschilds are just one string to the cabals bow of…

Kvitova advances at Eastbourne, sets up final against…

Stringency of Local Content Act is more likely to achieve…

Bitcoin isn’t much of a macro hedge