Corruption In the Redistricting Process?

EDUCATION POLITICS – Every ten years, the board districts of the LAUSD are redrawn based on census data.

Even though the school district’s boundaries include cities other than Los Angeles and unincorporated portions of LA County, this process is controlled by Los Angeles City officials with the Mayor and the City Council President each appointing four members. Each of the LAUSD Board Members appoints the remaining seven members.

For Board District 2’s representative on the 2021 LAUSD Redistricting Commission, Monica Garcia appointed Luis Sanchez, who formerly served as her chief of staff. In 2011, Sanchez unsuccessfully ran against Bennett Kayser for the Board District 5 board seat that is currently held by Jackie Goldberg. Sanchez’s wife, Maria Brenes, runs InnerCity Struggle, an astroturf organization that has received funding from Eli Broad and others in the Nonprofit Industrial Complex pushing a school privatization agenda.

In 2018, with the teachers’ strike rapidly approaching, Garcia made an ill-fated attempt to transfer $125,000 from the LAUSD to InnerCity Struggle. This was about the same time Garcia was in Sacramento claiming the district could not meet the union’s demand for smaller class sizes because the district was facing bankruptcy. 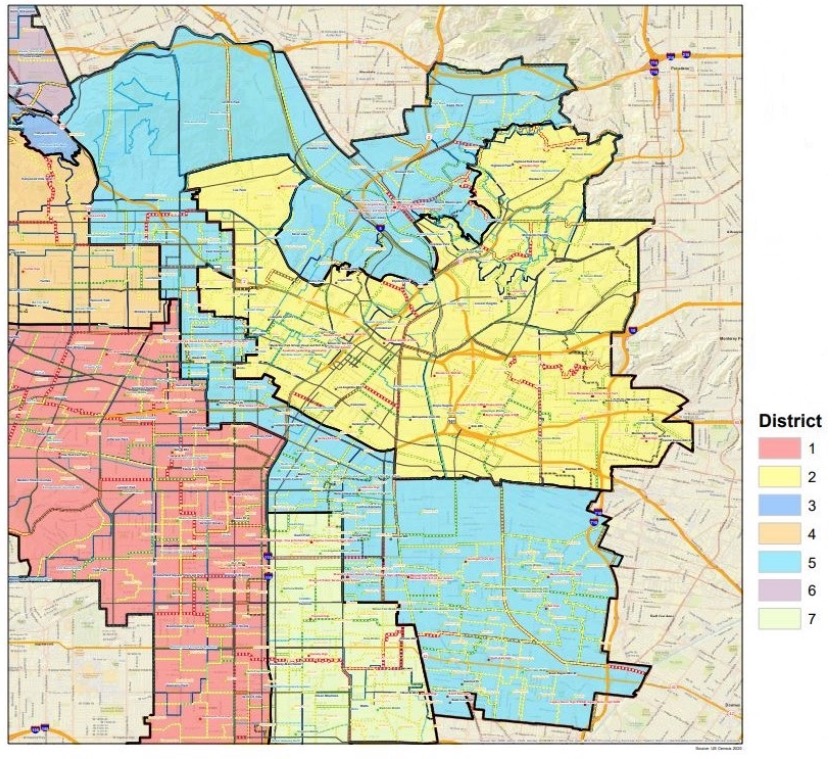 As chair of the Redistricting Commission, Sanchez introduced a last-minute change to the proposed map that made drastic changes to the boundaries of Board Districts 2 and 5. These new maps were heavily gerrymandered, completely surrounding District 2 with District 5. Areas that have historically not supported the Jose Huizar/Monica Garcia regime were transferred to District 5. This move was supported by multiple calls made during the public comment period from people identifying themselves as members of InnerCity Struggle.

It did not take long for the reasons behind Sanchez’s last-minute maneuvering to become clear. In February, Maria Brenes announced her candidacy for the school board in the newly redrawn District 2. SEIU 99, the union that has previously laundered campaign funds for the California Charter School Association, has spent $751,989.79 on the Brenes campaign. The possibility that this amount of money is coming from the pockets of classified employees seems as likely as janitors donating the maximum amount to Ref Rodriguez’s campaign in 2015. Infamous charter school supporter Bill Bloomfield has also spent another $13,086.72.

Sanchez’s placement on the redistricting commission may have come with a fee. According to persistent rumors, Brenes has agreed to appoint Monica Garcia as her Chief of Staff if she wins the election. This would mean that Garcia would continue to wield power despite her inability to run again due to term limits. Garcia 2.0 is a Putin-like power play that, if successful, could be bad news for the students of the district, especially those with special education needs.

(Carl Petersen is a parent advocate for students with special education needs and public education. He is an elected member of the Northridge East Neighborhood Council and serves as the Education Chair. As a Green Party candidate in LAUSD’s District 2 School Board race, he was endorsed by Network for Public Education (NPE) Action. Dr. Diane Ravitch has called him “a valiant fighter for public schools in Los Angeles.” For links to his blogs, please visit www.ChangeTheLAUSD.com. Opinions are his own.)

Why journalists are failing the public in political coverage

The Sports Report: Why the Rams signed linebacker Bobby Wagner

What to Watch in Today’s Primaries: Live Updates

Senate to continue probe on corruption allegations against…

The Dangers of Self-Determination

The Day These Drug Lords Meet

CBI books Kapil and Dheeraj Wadhawan of DHFL in India's…

David Ndii told his wife Mwende Gatabaki that bribery was…

The LGBTQIA+ Community Must Beware for Crypto Scams, US…